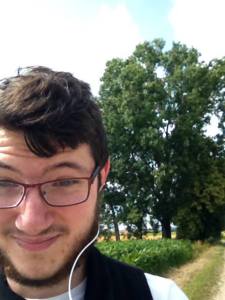 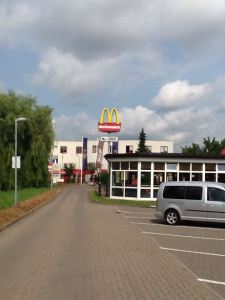 Here are McDonald’s banners waving valiantly in the…wait, do you see that? Do you see it, in the corner? 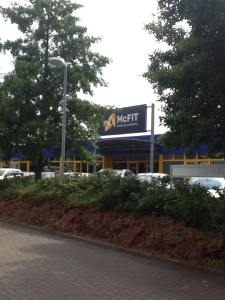 That’s right, it’s a gym, called McFIT. And it’s literally right next door to McDonald’s! So you can go straight from your McRibs and McMuffintops to working it off at McFit…or vice versa, depending on which one best feeds your ego. 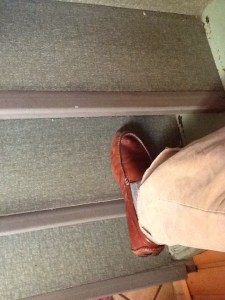 This should give you a solid idea of how SMALL the stairs are here. It’s as if tripping down the stairs here is less of a risk and more of a tradition.
Let’s not even mention how often I bump my head when walking through the doorways! 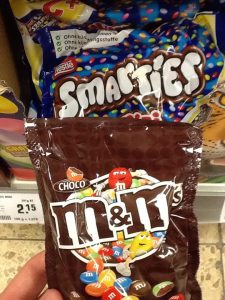 You won’t come across M&M’s too often around these parts, but instead Germans like a similar  candy called Smarties…which are really gross.

The knock-off version of Oreo’s, on the other hand, are just fine. And pretty cheap! I just can’t come to understand why they aren’t called Schwarz und Weiss. 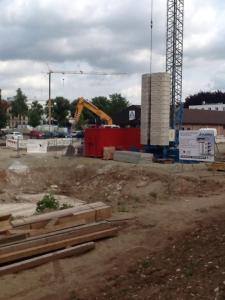 There is a lot of construction going on here, but do you see that big blue ‘A’ back there? Yeah, it’s for ALDI Markt. America is starting to catch on to the awesomeness of Aldi, but Germans have been all-about-Aldi for a while now. Gottingen isn’t even that big of a city, and we have seven of them!

It’s also pretty common to see VW’s and Audi’s here. There’s a common saying, that if you buy a VW or an Audi, then you also bought the right-of-way. For me, as a pedestrian, that’s pretty scary.

Here’s the neighbor’s house, really beautiful architecture. And those white bricks you see there? Those are for the second house our neighbors are building on the same lot. Sweet stuff.

Here’s my favorite thing about our backyard: we have plants that grow mini-strawberries! I love going back there and picking some, they’re like delicious little candies.

The backyards, in general, seem to be pretty oddly shaped. Ours is pretty big (right), but you have to walk through a long thin path (left) to get there. A lot of the backyards seem to be randomly divided in this manner.

Behind all of our backyards are little tiny streams coming from the main rivers, and this is literally some of the coldest water I have ever felt. Definitely a great way to wake me up when needed! 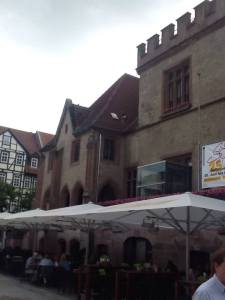 This is an old church, I believe, that’s now only used as a glorified restaurant and tourist information center. 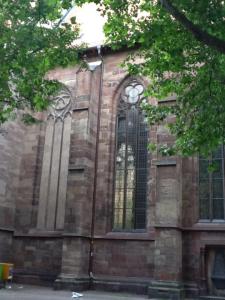 Here’s another church that’s absolutely beautiful but may or may not actually be used anymore. 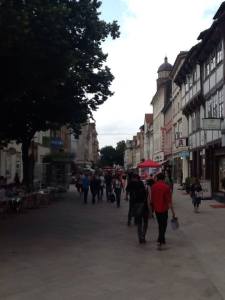 Whoever it was who decided that all these old houses should convert their ground floors into shops and restaurants and keep the upper floors as houses and apartments, and then convinced everyone to agree, was an absolute genius.

This is one of the most famous landmarks in Germany…something to do with a swan princess folktale I think, I can’t really remember. But, hey, it’s pretty. 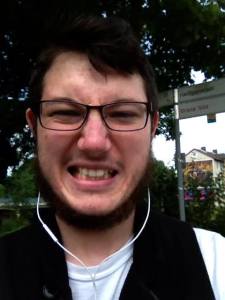 Now I’m going to take you with me on a bike ride through some of my favorite routes! (To which those signs behind me offer no help whatsoever.) 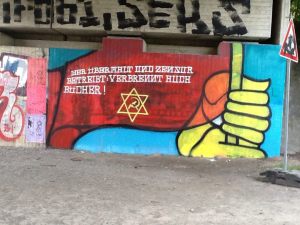 I have no idea what this means, but it’s pretty easy to come across some really awesome graffiti art here. This probably translates to, Down with America!, or something like dat.

Here’s the predominantly pointless stop sign to keep me from crossing past ‘der Polizei,’ the police station. One time, I was stopped here pointlessly with another biker stopped on the other side. We were both just laughing at each other, as we could tell we both wanted to just cross anyway, but we weren’t about to break the law on the police station’s front lawn.

Here’s the river I really love biking alongside, and to the right you get a good view of how close the bike path is to the river. 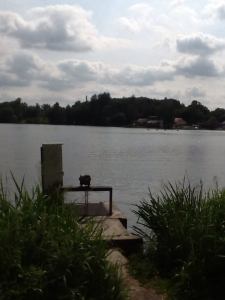 Here’s a lake I occasionally bike around. Those little dots on the water’s surface are four bro-dudes playing some fun-looking game with kayaks and a volleyball.

This is a fun spot to bike through. It’s like a small cluster of farms and houses packed into an acre, as I’m biking straight through a completely self-sufficient Amish community or something.

This is just a cool straight line of trees…no funny comment.

This dog was particularly fun to wash, a yellow lab that, after swimming in the river, ran into the field and rolled around in a frenzy for a few minutes.

This leads me to some of my favorite funny stories so far. People literally walk their dogs everywhere, even into stores. Being a big dog person, I have a child-like tendency to, whenever I see one of these creatures, yell out, “Puppy!” However, this sounds a whole lot like the German word, “Papi,” the equivalent to daddy. On my first or second day here, I saw an older man walking his dog, so I naturally yelled out, “Puppy!” My German family began laughing at me as I had no idea of this possible word confusion, and the man walking his dog looked at me with a really strange reaction.

A few weeks later, I was with some friends shopping in H&M. Not finding any interest in the clothes but instead finding it really interesting that the stores allowed dogs to come inside, I watched as a women shopping with a small white terrier on a leash. As she looked at one rack, the dog lied down. Then the woman kept walking, and she was literally just dragging her dog around the tile as the dog continued laying. Literally the funniest thing I’ve seen all summer. If only I’d had my camera then! 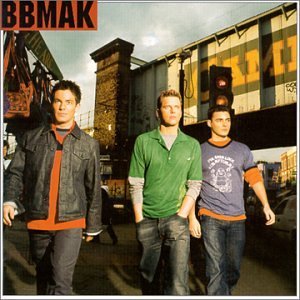 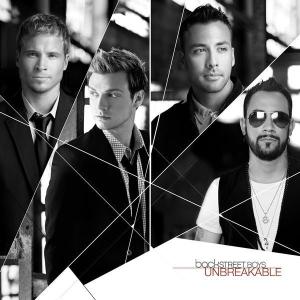